I love the high desert, but let’s be honest – there’s so much of it to love. The stretch of road between Fernley, Nevada and the Idaho border on US-95 is a sea of sagebrush. When you start bouncing back and forth between the rumble strips, it’s time to find an adventure.

The day before leaving Boise, I flipped through a guidebook trying to find a short hike for Aspen to stretch her legs and discovered Leslie Gulch. The detour off the highway was a bit farther than I hoped for, but so worth it!!

There are various gulches to explore, each rewarding in its own way. On a whim, we chose Juniper Gulch. Most of the trailheads are equipped with a trash can and restroom, nothing fancy but more than I expected an hour off the highway.

We accidentally visited Leslie Gulch during the perfect season, the green on the mountains fantastically contrasted the vivid orange hues. The only thing that could add to it was a dusting of snow, but I doubt I would have braved the dirt road with just Aspen, me, and a signal-less cell phone. During the summer, I’m not sure how well the blazing sun would complement the gulch…early morning or evening, I think.

There were so many jaw-dropping rock formations above me and cool rocks below, it’s a miracle I didn’t face plant in the middle of the trail or should I say dry-creek bed. The main trail became more apparent when we gained a bit of elevation and a view!

With eight hours left on the road, we decided to head back for the car. Or should I say, I decided we were headed back to the car. 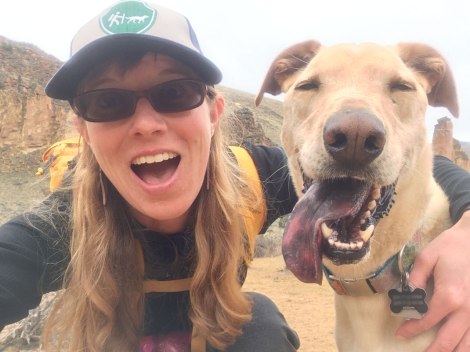 Mere moments before she found out we were turning around.

We hiked .87 miles in with a honeycomb amphitheater reward. This out-and-back is a chose your own adventure, from a short stroll to cresting the saddle and joining the Oregon Desert Trail. 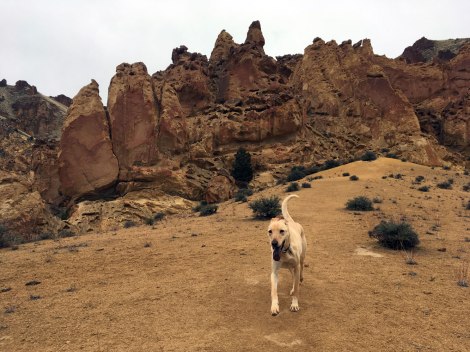 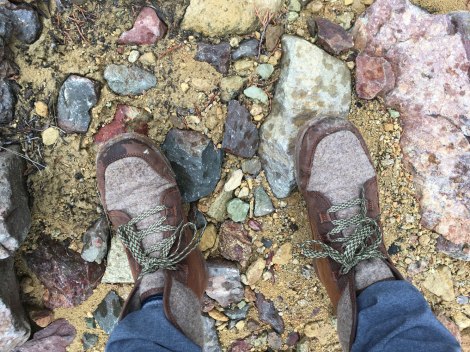 No time for rock hounding today…

Driving from Boise, there are hints of captivating geology drawing you from the tedious stretch of US-95; take the suggestion – go explore.

Dang it, I always miss the memo when we’re supposed to do a serious face for the photo...🐕 . . #HikingWithAspen #AdventurePup #DogsThatHike #CampingWithDogs #HikingWithDogs #MyDogIsMy #BackcountryPaws #AdventureMutts #WomenHikingWithDogs #TrailsPress #LifeWithNoLeash #TuffPupper #Muttaineer
The Oregon Coast is more than beach zoomies. But honestly, we don’t need much more than that. Wait! I want the cheese and ice cream too! 🐕🌊🧀 Blog post up on our trip along the entirety of the Oregon Coast from September. Visit TrailsPress.com, link on main page. #HikingWithAspen #AdventurePup #DogsThatHike #CampingWithDogs #HikingWithDogs #MyDogIsMy #BackcountryPaws #AdventureMutts #WomenHikingWithDogs #TrailsPress #LifeWithNoLeash #TuffPupper #BeachZoomies #ThePeoplesCoast #TravelOregon #PNWonderlandDogs #OregonCoast #UpperLeftLiving
Not sure how to wrap up this year...we saw some beautiful places and @wesleyhavener gave us all a real good scare. Might I suggest a different method of busting into the top 9 in 2020...much appreciated. #ThatsAWrap
Mount Laundry continues to grow since we opted to head to the actual mountains today. #WorthIt ❄️ . . . #HikingWithAspen #AdventurePup #DogsThatHike #CampingWithDogs #HikingWithDogs #MyDogIsMy #BackcountryPaws #AdventureMutts #WomenHikingWithDogs #TrailsPress #LifeWithNoLeash #TuffPupper #Muttaineer #PowderHound
I’ll start with Aspen is home safe. Important reminder - if you see a pup wandering the streets without their person, do what you can to help them find their way back home. As a dog parent, be sure to have current tags on their collar and your latest info on their chip. After yesterday’s events, I’m also adding a sign to our gate to remind people to make sure it is latched... 🐕 Due to accident on our gardener’s part, Aspen got out of the yard yesterday, crossed the busiest street in our neighborhood, and thankfully found her way into the company of some helpful folks in an office building who called me. I cannot thank them enough. My eyes sting if I even start to think of what could have happened to her crossing that street or the sheer panic I would have felt coming home to find her missing. Hug your pups and keep them safe. 🐕 #ICantEven #KeepYourDogSafe #DogLicense #ChipYourPets #LatchYourGates #ItsNotAllMountainTopVistas #DogParent #DogMom #WorstNightmare
%d bloggers like this: