For those weekends you can’t decide which adventure you want to have – don’t decide, choose all of them. For Memorial Day weekend, Route and I packed the Cherokee for her maiden voyage and headed up toward Ebbetts Pass. 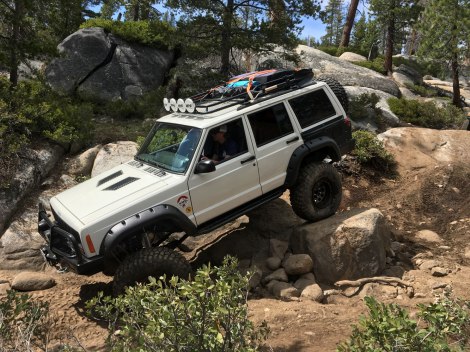 My first time driving the length of the Slick Rock 4WD Trail.

Four-wheeling is where my connection to nature began – my brother and I in car seats in the back of our family Bronco crawling over rocks. At camp we would explore granite slabs and follow the creek up the mountain side. Now we have two generations of wheelers in the family and my dad is having a proud papa bear moment.

As the dirt road turned into the rock road of the Slick Rock 4WD trail, my nerves grew but I told them to sit down, shut up, and hold on. I’d already driven a majority of the trail and had my dad there to guide me through the harder sections. The Cherokee came out unscathed – I promise we’re just airing the tires back up in the photo below. 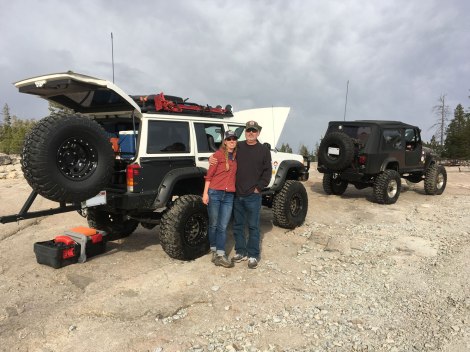 After a day of wheeling, we made our way to Spicer Reservoir Campground. I was a bit surprised at the number of spots we had to choose from arriving Saturday evening on a holiday weekend. We set up our tent, took a walk down to the lake, and then settled in for the night as the hum of generators rattled us to sleep. There were still 30 minutes until quiet hours, so we thought we’d only have to endure this for a short while. HA! I woke up at 1:30 in the morning – no joke there was a generator running. I now remember why I typically avoid established campgrounds… 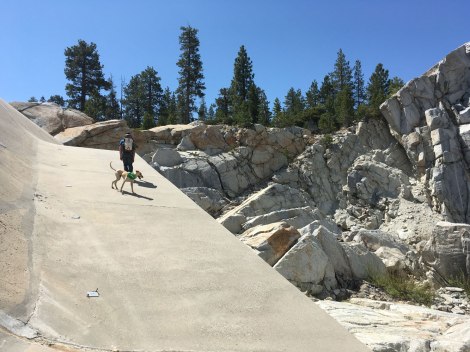 Hiking across the dam to the Spicer Terraces climbing area. 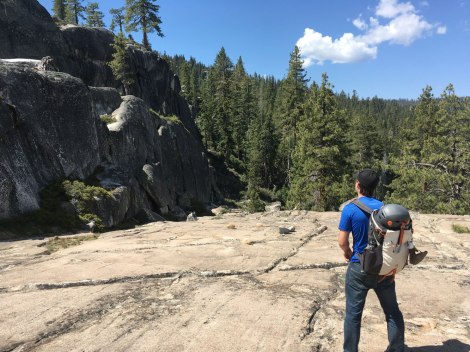 Scoping out our options for the day.

The climbing along Highway 4 isn’t well documented on the internet and there is no guide book for the area, but we did the best we could with California Road Trip: A Climber’s Guide Northern California by Tom Slater and Christ Summit. Spicer Terraces seemed the most promising for sport and trad so that’s where we explored first. There is a dynamited wall with a few top rope options in the spillway, but Route wanted to climb natural rock so we hiked above the spillway and found a short 40ish-foot wall and had the entire Terraces to ourselves. 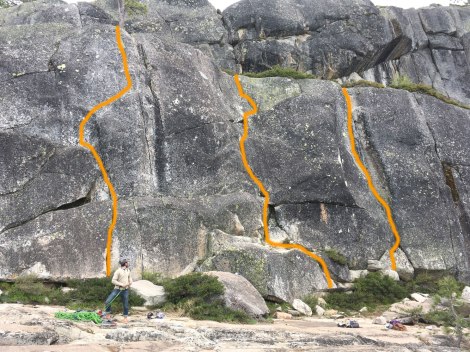 Spicer Terraces were ours for the day.

Since there’s little information for the area, we weren’t sure what we were climbing. I asked Route to take his best guess on ratings though. We started on the far right with a stemming problem that was a 5.9 and our favorite of the day. Next, we climbed the middle route that probably would have been a fantastic warmup at a 5.6 or 5.7. My last climb was on the far left at a 5.9 transitioning into a 5.10a. The second half is on a bolted face with the crux at the top requiring smearing and micro edging. After we both completed this route, he left the rope up and climbed the crack below the last section for his fourth climb of the day at a 5.10b or c.

After a day of climbing we headed toward Ebbetts Pass to jump in Lake Alpine and find a quieter place to camp for the night. I will note, by jump I mean I talked about my strategy of getting from the shore to a deep enough spot where I didn’t have to touch the water until I could get all the way in for a solid 10 minutes until I said, “OK, I’m going in!” And Route gave me a literal nudge of encouragement. Pretty sure I would still be crouched by the lake talking about getting in if he hadn’t been so “supportive.” 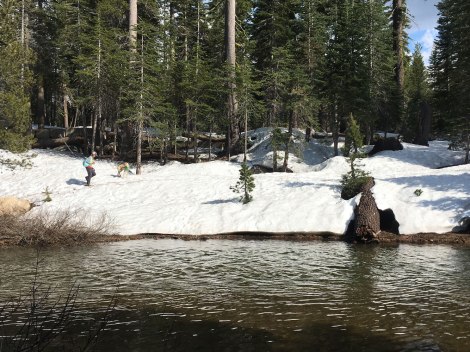 In my defense, there was snow melting into the lake!

After drying off we drove up Highway 4 to find a campsite with an amazing view. It was close to the road, but still quieter than the generator-fest down the mountain. 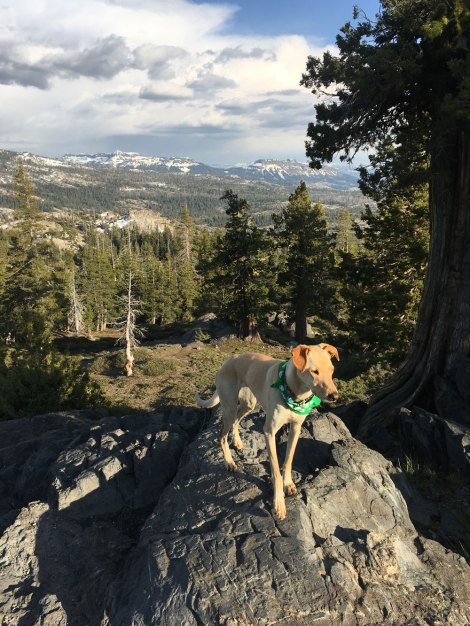 Cute pup and a view!

To end our adventure, we headed to Hell’s Kitchen for my first outdoor bouldering experience. To be honest, I’ve gotten used to the security of a rope for climbing and found I didn’t trust my skills for the high V0 at the Purgatory Towers boulders. Route did a few climbs and then we decided to fit in one more adventure. 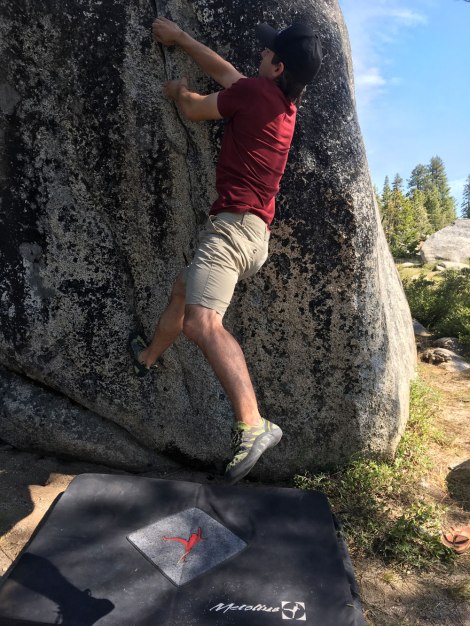 Route at the West Side Boulders.

Bear Valley has a great disc golf course called Rick’s Revenge. I’m not sure who Rick is or what his need for revenge is, but it’s a fun course. I’ve seen folks there with dogs at their side, a beer in one hand and disc in the other. Now we were those people! The shop across the street sells discs, so if you don’t have a set no worries. 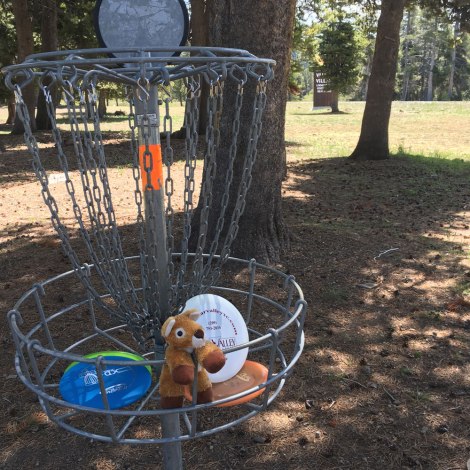 Harper Fawn is on par.

3 responses to “Ebbetts Pass: Choose All Of The Adventures” 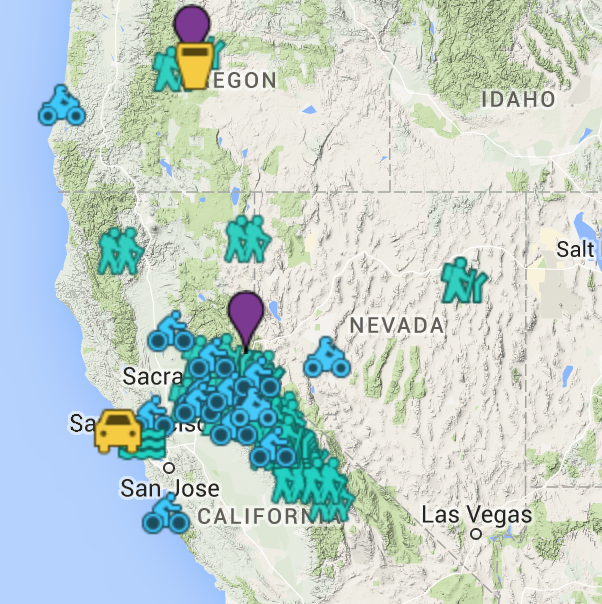