For adventures, we typically head to the mountains; the Lost Coast had me scouring the Internet for ocean insight. I just wasn’t sure what dog advice to heed. Now that we’ve experience the rugged coastline first paw, I wanted to report back. A few human topics to start, but feel free to scroll down to the dog part.

Shuttle
With five ladies and an adventure pup, we didn’t even consider hiring a shuttle. We left one car at Black Sands Beach Trailhead and piled into my CR-V. All five packs made a nice little bed for Aspen in the back. The most impressive part though, was that at the end of our trip we fit everyone and everything into a Honda Fit. Aspen had a three pack bed and two ladies had to snuggle with their packs, but we Fit! Based on a brief search, one company allows dog, but you’ll pay at least $30 for a cleaning fee, plus $85-ish per person.

Impressed it all fit, more impressed that it all squeezed in the Fit for the drive back.

Itinerary
The first day we hiked 6.8 miles from Mattole to Cooksie Creek. There is lots of space for tents and a nice creek leading into a mostly stagnant pool, which reflects the sunset delightfully. The second day we hiked 9.8 miles to Flat Creek, which I think had lots of tent space, but it was all hiding among the bushes. Trying to keep Aspen out of poison oak and ticks off of us, we found a site on the edge of the brush and didn’t explore much past that. There was a nice pool at this site that I felt much better about swimming in. The last day we wanted to get a jump on the drive back to Mattole, so we hiked the 8.5 miles out to Black Sands Beach.

Tide Chart
This was the most concerning part of the prep for me. But I found three websites that made everything clear. NOAA’s tide prediction, this is what I printed out and carried with us – be sure to change to your dates. On Wonderland Guides’ Lost Coast Trail tides planner page, enter the tide level you prefer and it will estimate times to pass through the impassable zones. Their general Lost Coast Trail page sheds some light on what the numbers mean. The high-tide zones are typically passable at three feet, but see the photo of hikers in the ocean south of Miller Flat at 2.5 feet – no thanks. We opted to time that section of trail at two feet to be cautious. 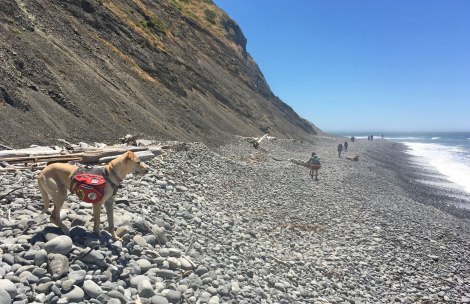 Not too sure about that loud water…

Dog Part
A little background on Aspen, in case you’re new to the blog, she’s got some trail cred. She’s hiked 56 miles of the John Muir Trail, thru-hiked the 168-mile Tahoe Rim Trail, and just generally does not stop running when outside. Her pads are tougher than your average doggo’s. However, her fondness of water is strikingly below your average doggo’s. After a dip in a river on a SUP board, Aspen hates loud water, which had me a bit concerned about her stress level with loud waves. But hey, I never had to worry about keeping her out of the ocean! Simply put, the most important aspect of taking your adventure pup on the Lost Coast is knowing them and their capabilities.

Back to the beach after the bypass over Hat Rock – impassable at all tide levels. Thankfully Aspen’s pack has a handle to help get her down this little cliff.

Paws
In all of my research, dog booties were an absolute must. However, Ruffwear booties give Aspen hot spots on the top of her paws, so I fashioned some out of rip-stop nylon and Plasti Dip. Before we left Mattole, I used vet tape to first secure her Ruffwear socks and then her booties. I needed a more effective tape job – they stayed on for all of five minutes… Aspen has tough pads, so I took off her pawtection for the time being and down the beach we went. Throughout the trip, I put Musher’s Secret on Aspen’s paws, which helps form a protective wax barrier for her pads.

Our second day on the trail was warm so I monitored the temperature of the ground. Around 11:00 am, I decided the black sand and dark rocks were getting too hot and taped Aspen’s socks on. This time they stayed, but I didn’t bother with the nylon booties.

On the last day, with a mile or two left in our hike, Aspen stopped to lick one of her paws. I took a look and cleared out any sand between her toes, it looked good and Aspen took off running. Instead of booting up, I just kept an eye on her and she completed the hike without issue. Know your dog’s paws and plan accordingly. 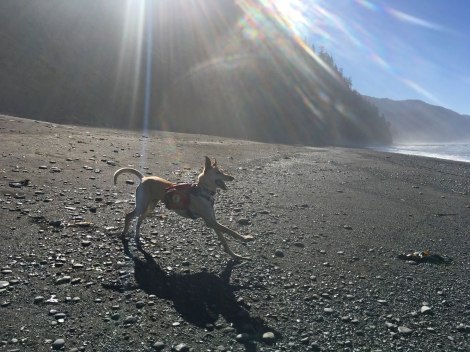 Blood Sucking Bastards AKA Ticks
The first day was the only day we had to wait for low tide. We sat at Sea Lion Gulch for four hours. There was no shade, Aspen kept trying to go in a patch of poison oak, and we both ended up with ticks. I caught four on me and at least that many on Aspen just while waiting. Once we got to camp at Cooksie Creek, I did a thorough tick check, where I found eight more. We must have been quite a site, poor Aspen standing in the pool at Cooksie Creek, me yelling in victory each time I found one then running to shore to smash the blood sucker with a rock, while Aspen looked on with her tail tucked as far up as it would go. Even with all of that, I woke up at two in the morning to a tick crawling up my arm and Aspen scratching one off of her ear in the morning. The rest of the trip we avoiding sitting around in brushy areas, but still found a couple here and there. Plus a few after we returned home, not the kind of souvenir we typically go for… Aspen is on a parasite prevention treatment and if you’re bringing your dog, I suggest they be on some form of prevention as well. 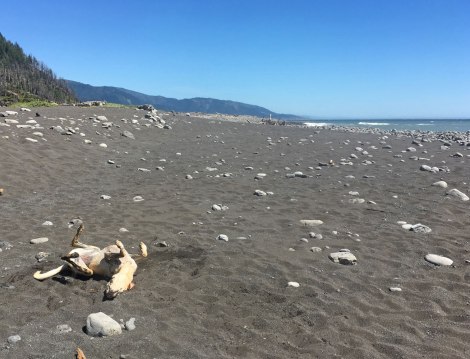 Drying off near the giant pool at Flat Creek.

Poison Oak
The poison oak wasn’t actually too bad the first day. When we got to camp I only needed to wash Aspen’s legs. Some folks opt for Tecnu, but dish soap has worked well for me in the past. The stretch north of Miller Flat was absolutely littered with poison oak. We opted to take the trails on the bluffs above the beach when available and at one point the trail went right through the middle of a poison oak bush the size of a four-person tent.  At Flat Creek, Aspen got a bath using a bear canister as a bucket from the tip of her nose to the tip of her tail. Plus I washed off her pack too since it was at prime poison oak-height. South of Flat Creek there was a little poison oak initially, but avoidable. Then the trail was on the beach and clear of poison oak and ticks! The only way to avoid poison oak is to hike on the beach the entire time and I’m not positive that is a realistic option. But if I were hiking the trail again, I’d give it a try!

Rattlesnakes, Coyotes, and Bears Oh My!
All of the blogs and comments mentioned rattlesnakes and bears, but no one mentioned seals disguised as logs! We saw zero rattlesnakes and bears, but twice almost stepped on a seal. These sneaky buggers use their fins to flip sand on themselves and then take a snooze. In groups they’re easy to spot, but one of our ladies was 10 feet away when she realized the log wasn’t a log. The second time, Aspen was out in front when a log came to life and snarled at her. She nearly jumped out of her fur. This was the only day we encountered log seals, but keep a lookout because their camouflage game is on point!

On our Flat Creek morning constitutional, Aspen and I had a wildlife encounter that was slightly terrifying. A coyote was passing through the camp area. I thought it would pass by, and it was, until it saw Aspen. As soon as it saw her, it starting yipping and barking; I didn’t know if it was calling for reinforcements, trying to threaten Aspen, or lure her over, but I was having none of it! I started yelling and throwing rocks, which did not affect the coyote at all… disconcerting. I picked up three large rocks in case it got closer and continued to throw smaller rocks and yell. Thankfully, two other campers came over to see what all the yipping was about and shooed the coyote away. Apparently it kept trying to flank them and get back to Aspen, but they finally scared it off. We headed back to camp where thankfully I put Aspen in the tent, because 10 minutes later, the coyote came slinking out of the bushes! More yelling and rock throwing scared it off for good this time, the four additional ladies probably helped too. During the initial encounter poor Aspen was quaking so much her teeth were chattering, but that coyote didn’t realize it was messing with a momma bear…

Do better things with your time coyote!

The tick stress dreams and poison oak paranoia had me longing for higher elevation, but the Lost Coast is a truly gorgeous stretch of landscape. Just watch out for that damn coyote…